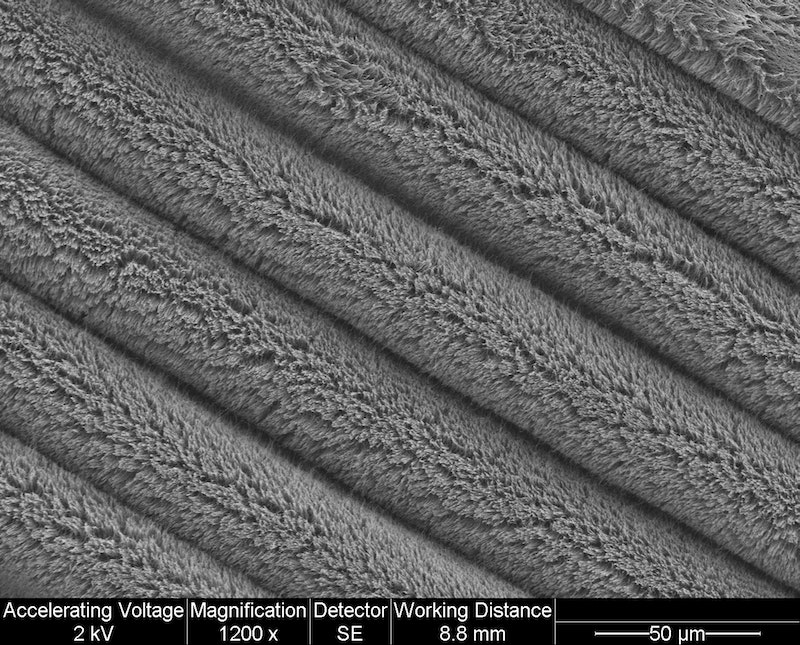 For emerging wearable tech to advance, it needs improved power sources. Now researchers from Michigan State University have provided a potential solution via crumpled carbon nanotube forests, or CNT forests. For more information see the IDTechEx report on Flexible, Printed and Thin Film Batteries 2019-2029.
Changyong Cao, director of MSU's Soft Machines and Electronics Laboratory, led a team of scientists in creating highly stretchable supercapacitors for powering wearable electronics. The newly developed supercapacitor has demonstrated solid performance and stability, even when it is stretched to 800% of its original size for thousands of stretching/relaxing cycles.
The team's results, published in the journal Advanced Energy Materials, may spur the development of new stretchable energy electronic systems, implantable biomedical devices, as well as smart packaging systems.
"The key to success is the innovative approach of crumpling vertically aligned CNT arrays, or CNT forests," said Cao, MSU School of Packaging assistant professor. "Instead of having a flat thin film strictly constrained during fabrication, our design enables the three-dimensionally interconnected CNT forest to maintain good electrical conductivity, making it much more efficient, reliable and robust."
Most people know wearable tech in its basic form as iWatches that communicate with smartphones. In this example, that's two pieces of technology that need batteries. Now imagine patches of smart skin for burn victims that can monitor healing while powering themselves ­- that's the future that Cao's invention can create.
In the medical field, stretchable/wearable electronics are being developed that are capable of extreme contortions and can conform to complicated, uneven surfaces. In the future, these innovations could be integrated into biological tissues and organs to detect disease, monitor improvement and even communicate with medical practitioners. The vexing problem, however, has been a complementary wearable power source - one that lasts and is durable. Why develop cool new patches if they have to run off bulky battery packs that get hot and require recharging? (That's extreme, but you get the idea.)
Cao's discovery is the first to use crumpled standing CNTs for stretchable energy storage applications, which grow like trees with their canopies tangled on wafers. This forest, however, is merely 10-30 micrometers high. After transferred and crumpled, the CNT forest forms impressive stretchable patterns, like a blanket. The 3D interconnected CNT forest has a larger surface area and can be easily modified with nanoparticles or adapted to other designs.
"It's more robust; it's truly a design breakthrough," said Cao, who's also an assistant professor in mechanical engineering and electrical and computer engineering. "Even when it's stretched up to 300% along each direction, it still conducts efficiently. Other designs lose efficiency, can usually be stretched in only one direction or malfunction completely when they are stretched at much lower levels."
In terms of its ability to collect and store energy, Cao's crumpled nano-forests outperformed most other CNT-based supercapacitors that are known to exist. Even though the top-performing technology can endure thousands of stretching/relaxing cycles, there's still room for improvement. Metal oxide nanoparticles can be easily impregnated into the crumpled CNTs so that the invention's efficiency improves much more. The newly invented approach should spark the advancement of self-powered stretchable electronic systems, Cao added.
Source and top image: Michigan State University
Learn more at the next leading event on the topic: Healthcare Sensor Innovations USA 2020