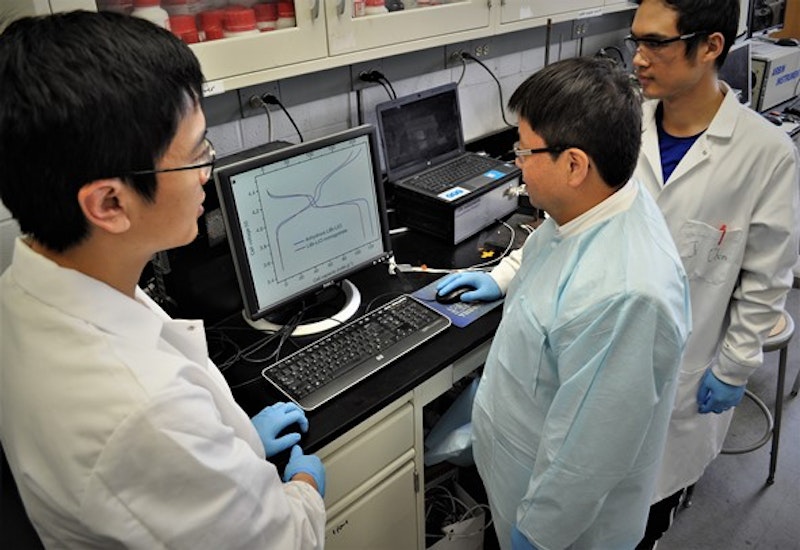 Researchers at the University of Maryland and US Army Research Lab have taken a critical step on the path to better high energy batteries by improving their water-in-salt battery with a new type of chemical transformation of the cathode that creates a reversible solid salt layer, a phenomenon yet unknown in the field of water-based batteries. For more information see the IDTechEx report on Advanced Li-ion & Beyond Li-ion Batteries 2018-2028.
Building on their previous discoveries of the water-in-salt electrolytes reported in Science in 2015, the researchers added a new cathode. This new cathode material, lacking transition metal, operates at an average potential of 4.2 volts with excellent cycling stability, and delivers an unprecedented energy density comparable, or perhaps higher than, non-aqueous Li-ion batteries. The authors report their work on May 9 in the journal Nature.
"The University of Maryland and ARL research has produced the most creative new battery chemistry I have seen in at least 10 years," said Prof. Jeffrey Dahn of Dalhousie University in Canada, an expert in the field not affiliated with the research. "However, it remains to be seen if a practical device with long lifetime can be created."
Leveraging the reversible halogens intercalation in graphite structures, enabled by a super-concentrated aqueous electrolyte, the team generated an energy density previously thought impossible. The researchers found that the super-concentrated solution of the water-in-salt battery, combined with graphite anode's ability to automatically build and re-form a protective layer within the battery, gave a stable and long lasting battery with high energy.
"This new cathode chemistry happens to be operating ideally in our previously-developed 'water-in-salt' aqueous electrolyte, which makes it even more unique - it combines high energy density of non-aqueous systems with high safety of aqueous systems," said a co-first author of the paper, Chongyin Yang, an assistant research scientist in the UMD department of chemical & biomolecular engineering.
"This new 'Conversion-Intercalation' chemistry inherits the high energy of conversion-reaction and the excellent reversibility from intercalation of graphite," said Ji Chen, co-first author of the paper and a research associate in the department of chemical & biomolecular engineering.
The team of researchers—led by Chunsheng Wang, ChBE Professor with a dual appointment in the Department of Chemistry and Biochemistry; Kang Xu, ARL Fellow; and Oleg Borodin, ARL scientist -- have advanced the battery into a testable stage: the size of a small button, typically used as a test vehicle in research labs. More research is needed to scale it up into a practical, manufacturable battery.
The energy output of the water-based battery reported in this study boasts 25% increased energy density of an ordinary cell phone battery based on flammable organic liquids, but is much safer. The new cathode is able to hold 240 milliamps per gram for an hour of operation, roughly twice that of a typical cathode currently found in cell phones and laptops.
The water-in-salt battery could ultimately be used in applications involving large energies at kilowatt or megawatt levels, or where battery safety and toxicity are primary concerns, including non-flammable batteries for airplanes, naval vessels, or spaceships.
Source and top image: University of Maryland