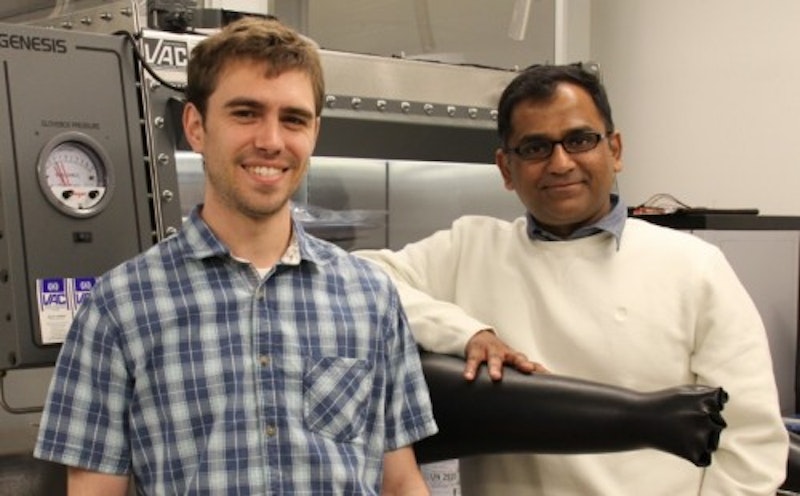 Researchers have built a more efficient, more reliable potassium-oxygen battery, a step toward a potential solution for energy storage on the nation's power grid and longer-lasting batteries in cell phones and laptops.
In a study published this month in the journal Batteries and Supercaps, researchers from The Ohio State University detailed their findings centering around the construction of the battery's cathode, which stores the energy produced by a chemical reaction in a metal-oxygen or metal-air battery. The finding, the researchers say, could make renewable energy sources like solar and wind more viable options for the power grid through cheaper, more efficient energy storage. For more information see the IDTechEx report on Advanced Li-ion & Beyond Li-ion Batteries 2018-2028.
"If you want to go to an all-renewable option for the power grid, you need economical energy storage devices that can store excess power and give that power back out when you don't have the source ready or working," said Vishnu-Baba Sundaresan, co-author of the study and professor of mechanical and aerospace engineering at Ohio State. "Technology like this is key, because it is cheap, it doesn't use any exotic materials, and it can be made anywhere and promote the local economy."
Renewable energy sources don't emit carbon dioxide, so they don't contribute to global warming—but they provide energy only when the sun is shining or the wind is blowing. In order for them to be reliable sources of power for a region's energy grid, there needs to be a way to store excess energy gathered from sunshine and wind. Companies, scientists and governments around the world are working on storage solutions, ranging from lithium-ion batteries—bigger versions of those in many electric vehicles—to giant batteries the size of a big-box store made using the metal vanadium.
Potassium-oxygen batteries have been a potential alternative for energy storage since they were invented in 2013. A team of researchers from Ohio State, led by chemistry professor Yiying Wu, showed that the batteries could be more efficient than lithium-oxygen batteries while simultaneously storing about twice the energy as existing lithium-ion batteries. But potassium-oxygen batteries have not been widely used for energy storage because, so far, they haven't been able to recharge enough times to be cost-effective.
As teams tried to create a potassium-oxygen battery that could be a viable storage solution, they kept running into a roadblock: The battery degraded with each charge, never lasting longer than five or 10 charging cycles—far from enough to make the battery a cost-effective solution for storing power. That degradation happened because oxygen crept into the battery's anode—the place that allows electrons to charge a device, be it a cell phone or a power grid. The oxygen caused the anode to break down, making it so the battery itself could no longer supply a charge.
Paul Gilmore, a doctoral candidate in Sundaresan's lab, began incorporating polymers into the cathode to see if he might be able to protect the anode from oxygen. If he could find a way to do that, he thought, it would give potassium-oxygen batteries a shot at longer lives. It turned out he was right: The team realized that swelling in the polymer played a vital role in its performance. The key, Gilmore said, was finding a way to bring oxygen into the battery—necessary for it to work—without allowing oxygen to seep into the anode.
This design works a bit like human lungs: Air comes in to the battery through a fibrous carbon layer, then meets a second layer that is slightly less porous and finally ends at a third layer, which is barely porous at all. That third layer, made of the conducting polymer, allows potassium ions to travel throughout the cathode, but restricts molecular oxygen from getting to the anode. The design means that the battery can be charged at least 125 times—giving potassium-oxygen batteries more than 12 times the longevity they previously had with low-cost electrolytes.
The finding shows that this is possible, but the team's tests haven't proven that the batteries can be made on the scale necessary for power-grid storage, Sundaresan said. However, it does show potential. Gilmore said potential may also exist for potassium-oxygen batteries to be useful in other applications.
"Oxygen batteries have higher energy density, which means they can improve the range of electric vehicles and battery life of portable electronics, for example, though other challenges must be overcome before potassium-oxygen batteries are viable for these applications," he said.
And the finding offers an alternative to lithium-ion batteries and others that rely on cobalt, a material that has been called "the blood diamond of batteries." The mining of the material is so troubling that major companies, including TESLA, have announced their plans to eliminate it from batteries entirely. "It is very important that batteries intended for large-scale applications do not use cobalt," Sundaresan said.
And it is also important that the battery can be made cheaply. Lithium-oxygen batteries—a possible energy storage solution that is widely considered one of the most viable options—can be expensive, and many rely on scarce resources, including cobalt. The lithium-ion batteries that power many electric cars cost around $100 per kilowatt hour at the materials level. The researchers estimated that this potassium-oxygen battery will cost about $44 per kilowatt hour.
"When it comes to batteries, one size does not fit all," Sundaresan said. "For potassium-oxygen and lithium-oxygen batteries, the cost has been prohibitive to use them as grid power backup. But now that we've shown that we can make a battery this cheap and this stable, then it makes it compete with other technologies for grid power backup. If you have a smallish battery that is cheap, then you can talk about scaling it up. If you have a smallish battery that is $1,000 a pop, then scaling it up is just not possible. This opens the door for scaling it up."
Source and top image: Ohio State University