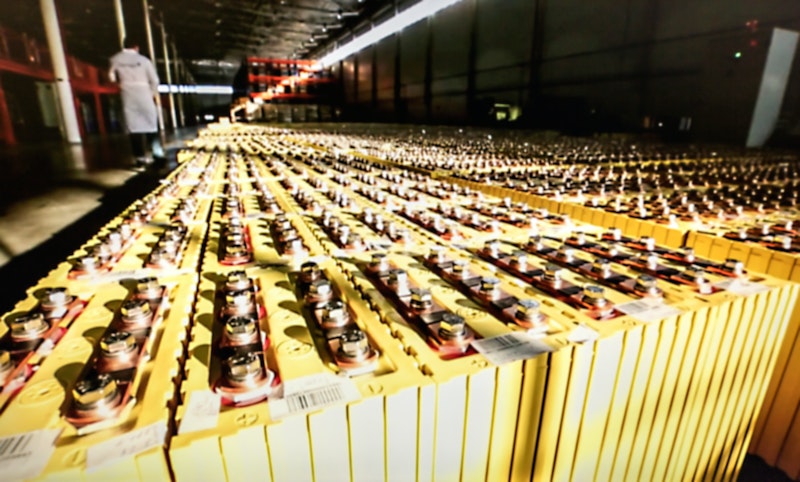 With accelerating uptake of lithium-ion batteries in stationary and mobile applications, today's shortages will reoccur in the years to come for many reasons beyond too few battery factories. For more, see the IDTechEx reports, "48V Mild Hybrid and 48V Full Hybrid Vehicles 2020-2030" and "Batteries for Stationary Energy Storage 2019-2029".
Future shortages remain difficult to predict. While mining analysts say shortages of the required lithium, cobalt and nickel could happen within a few years, Glencore recently closed the world's largest cobalt mine in the DRC due to poor demand.
The rise of pure electric cars is a major source of demand for Li-ion batteries, and to a lesser extent, stationary energy storage. Like electric mobility, Lithium-ion technologies are the most widely adopted technology for stationary energy storage, but in contrast face fiercer competition from a wider range of viable alternatives.
For example, the levelised cost of energy storage (LCOS) for grid-scale hot thermal storage is today close to $100 per MWh over the 30-year lifetime of a plant. Javier Cavada, CEO of cryogenic energy storage company Highview Power, expects its costs to fall to $50/MWh within ten years.
A new pumped-hydro plant (an old technology) may have an LCOS of $152-198 per MWh (and not face any future price rises), whereas a comparable lithium-ion battery system has an LCOS of $285-581/MWh, according to analyst Lazard. However pumped-hydro faces other issues such as geography and environmental impact, and cannot meet the total flexibility needs of the grid alone.
With a new gas-peaker plant having an LCOS of $156-210/MWh, and wind power at $30-60/MWh (Lazard), it may already cheaper to balance the grid using wind-powered liquid-air storage than fossil-fuel technology.
And Henrik Stiesdal, the Danish wind-power pioneer who heads Stiesdal A/S, believes that his hot-rock thermal storage system could make offshore wind a 24/7 energy source for an additional cost of only €17 ($19) per MWh within five years.
Indeed, many alternative energy storage technologies can have a cheaper LCOS due to longer lifetimes, as well as a more stable future by not having to face enormous demand from electric mobility and less reliance on critical raw materials. However, they are still unlikely to displace Li-ion technologies before 2030, which has a lower capex and a faster cost decline.
Li-ion battery demand is dominated by pure electric cars, where solar bodywork becomes very important. On the one hand it gives double the range with half the battery. On the other hand it has been demonstrated that a pure electric car used for short journeys can be saved from the crusher for at least two extra years by retrofitted solar.
Top up charging of trucks by intermittent catenary, coils in solar roads and so on can mean 80% reduction in battery size. The new 48V full hybrids use similar batteries to today's high voltage hybrids. If battery prices rise, the fact that both use one thirtieth of the battery in a Tesla will gain attention, the new 48V full hybrids being much lower cost than today's parallel and series-parallel hybrids yet with similar performance. Yes, engineers do workarounds and if these escape routes are activated, any Li-ion price rises may be short-lived.

Highlights From EVS 32
Highlights from Electric and Hybrid Marine Conference and Expo (2019)!
Sustainable Production, Traceability of Materials for Batteries
How are Batteries for Boats and Ships Different?