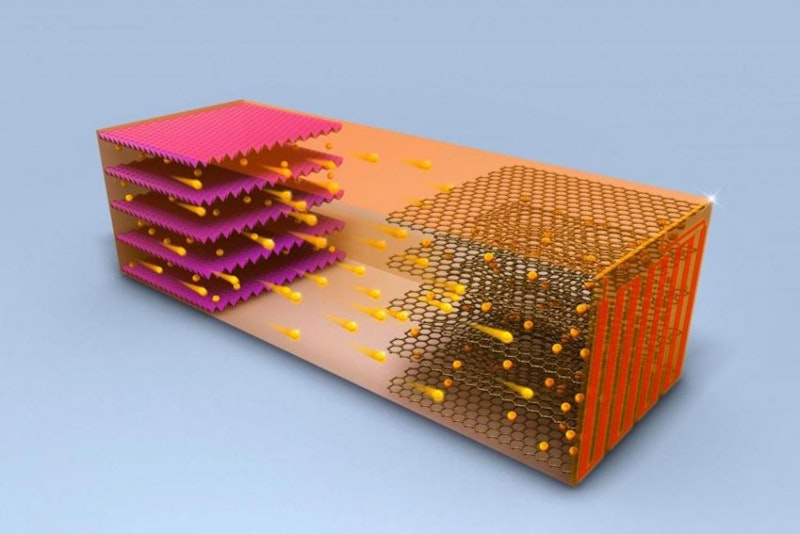 Scientist have developed a lithium ion battery that charges at an elevated temperature to increase reaction rate but keeps the cell cool during discharge, showing the potential to add 200 miles of driving range to an electric car in 10 minutes. If scaled, the design is one potential strategy to alleviate concerns that all-electric vehicles lack sufficient cruise range to safely reach a destination without stalling mid-journey. The Pennsylvania State University researchers present the work October 30 in the journal Joule. For more information see the IDTechEx report on Lithium-Ion Batteries for Electric Vehicles 2020-2030.
Scientists have recognized the need to design electric vehicle batteries capable of charging extremely fast in order to meet the needs of drivers. However, such a speedy charge rate would require a battery to rapidly take in 400 kilowatts of energy, a feat that current vehicles cannot accomplish because it risks lithium plating (the formation of metallic lithium around the anode), which would severely deteriorate battery life.
While conventional lithium batteries are charged and discharged at the same temperature, the researchers found they could circumvent the lithium plating issue by charging the battery to an elevated temperature of 60 degrees Celsius for a few minutes, then discharging it at cooler temperatures.
"In addition to fast charging, this design allows us to limit the battery's exposure time to the elevated charge temperature, thus generating a very long cycle life," says senior author Chao-Yang Wang, a mechanical engineer at The Pennsylvania State University. "The key is to realize rapid heating; otherwise, the battery will stay at elevated temperatures for too long, causing severe degradation."
In order to shorten heat time and heat the entire battery at a uniform temperature, Wang and colleagues outfitted a lithium ion battery design with a self-heating nickel structure that preheats in less than thirty seconds. To test their model, they charged three graphite pouch cells designed for hybrid electric vehicles at 40, 49, and 60 degrees Celsius, as well as a control at 20 degrees Celsius, using various cooling strategies to maintain constant charge temperatures. To confirm that lithium plating did not occur, they later fully discharged the cells and opened them for analysis.
Wang and the team found that the batteries preheated to 60 degrees Celsius could sustain the extremely fast charging process for 1,700 cycles, while the control cell could only keep pace for 60 cycles. At an average charge temperature between 49 and 60 degrees Celsius, the research did not observe any lithium plating. The researchers also observed that an increased charge temperature greatly reduced the cooling necessary to maintain the cell at its initial temperature--the control cell generated 3.05 watt-hours, while the 60-degree-Celsius cell generated only 1.7 watt-hours.
"In the past, it was universally believed that lithium ion batteries should avoid operating at high temperatures due to the concern of accelerated side reactions," says Wang. "This study suggests that the benefits of mitigated lithium plating at the elevated temperature with limited exposure time far outweigh the negative impact associated with exacerbated side reactions."
The researchers note that the technology is completely scalable because all the cells are based on industrially available electrodes; and they have already demonstrated its use in large-scale cells, modules, and battery packs. The nickel foil increases the cost of each cell by 0.47%, but because the design eliminates the need for the external heaters used in current models, it actually lowers the cost of producing each pack.
Next, Wang's team is planning to take their design a step further. "We are working to charge an energy-dense electric vehicle battery in five minutes without damaging it," he says. "This will require highly stable electrolytes and active materials in addition to the self-heating structure we have invented."
Source and top image: Cell Press