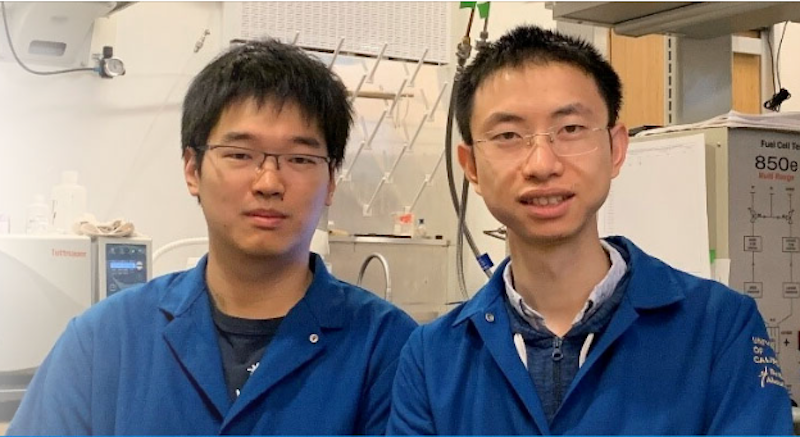 Materials scientists from UCLA and Johns Hopkins University have made a major leap in understanding the long-term effectiveness of fuel cells by integrating experiments with computer simulation studies. The result reveals a new mechanism in understanding how fuel cell catalysts can be made more durable. For more information see the IDTechEx report on Fuel Cell Vehicles 2019-2029.
Fuel cells convert chemical energy into electricity. One particular kind - hydrogen proton-exchange-membrane fuel cells (known as H2-PEMFC) - hold the potential to supplant internal combustion engines that power automobiles as a clean alternative, free of carbon emissions and pollutants. Such fuel cells use readily available hydrogen as their fuel, and their only exhaust is water.
To work, fuel cells need a catalyst to spark the chemical reaction that produces electricity. While the metal platinum is the ideal catalyst for this reaction, its prohibitively high cost has prevented fuel cells from becoming a competitive alternative. One way to bring costs down is to use metal alloys, with much smaller amounts of platinum, as the catalyst
In experiments, alloying platinum with a transition metal, such as nickel, have proven to be very effective catalysts. However, they don't last as long as desired, as the fuel cell's interior also corrodes alloy's atomic surface structure. According to U.S. Department of Energy targets, fuel cell systems should last for 8,000 hours of operation, however so far, they have not reached 5,000 hours.
Introducing a third element into the alloy has been proven to be an effective way to improve the durability of platinum alloy catalysts. However, the mechanism behind the enhanced durability had remained unclear.
The researchers set out to design a new method that combines both laboratory experiments and simulations to study the platinum alloy catalyst in atomic level. The results, published in the journal Matter, offer significant insights into the catalyst degradation process.
In experiments, the researchers found that introducing copper atoms into specially shaped nanoparticles of platinum-nickel demonstrated durability that proved to be 40% better than those without copper in terms of the efficiency of the catalyst. These particles are octahedral shaped - think an eight-sided, diamond shape reminiscent of custom dice used in role-playing games.
These new catalysts were very stable - that is, more transition metals were retained in the platinum-nickel-copper particles, despite the corrosive condition that could leach them out. And, they were also more efficient in catalyzing the chemical reaction compared to alloys of platinum-nickel and commercially used platinum-carbon.
To figure out why this was happening, the researchers derived a model based on experimental data and performed computer simulations that recreated how individual atoms were moving inside nanoparticles when a fuel was operating.
After seeing their simulations of the process closely mirrored their experiments, they found that an outsized distribution of platinum atoms would gather at the surface when copper is introduced during the synthesis. This is important as the surface is where the corrosive environment gets in touch with the catalyst. In other words, the more platinum there, the less surface vacancies created, resulting in improved durability for the fuel cell.
The study's principal investigator was Yu Huang, professor of materials science and engineering at the UCLA Samueli School of Engineering. Huang and her UCLA colleagues collaborated with researchers at Johns Hopkins, led by Tim Mueller, a professor of materials science and engineering at the Whiting School of Engineering.
"This is the first time nanoparticle simulations have been initialized closely matching the experimental growth trajectory," said Zipeng Zhao, a UCLA postdoctoral scholar of materials science and engineering, and a co-first author of the study.
As the leading laboratory in catalyst design and development, Huang's research group explores the unique technological opportunities in nanoscale that could impact a wide range of technologies, including materials synthesis, catalysis, fuel cells, and device applications.
"This new study marks a milestone in understanding the atomistic structure-function relations in nanoscale materials and opens the door to new design strategies for high performing nanoscale catalysts," Huang said.
Source and top image: UCLA