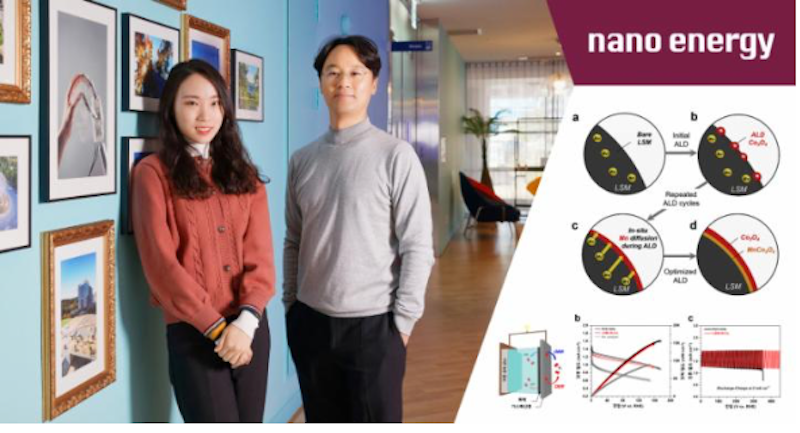 Metal-Air Batteries, which use oxygen from ambient air as recourses to store and convert energy, have received considerable attention for their potential use in electric vehicles owing to their large storage capacity, lightweight, and affordability. A research team, affiliated with UNIST has announced that a new catalyst that could boost Metal-Air Batteries performance, such as discharge and charge efficiency, was developed recently. For more information see the IDTechEx report on Lithium-Ion Batteries for Electric Vehicles 2020-2030.
A research team, led by Professor Guntae Kim in the School of Energy and Chemical Engineering at UNIST, has unveiled a new composite catalyst that could efficiently enhance the charg-discharge performances when applied to MABs. It is a form of very thin layer of metal oxide films deposited on a surface of perovskite catalysts, and thus the interface naturally formed between the two catalysts enhances the overall performance and stability of the new catalyst.
Metal-air batteries, in which oxygen from the atmosphere reacts with metals to generate electricity, are one of the lightest and most compact types of batteries. They are equipped with anodes made up of pure metals (i.e. Lithium, Zinc, Magnesium, and Aluminum) and an air cathode that is connected to an inexhaustible source of air. Due to their high theoretical energy density, MABs have been considered a strong cadidate for the next-generation electric vehicles. The currently existing Metal-Air Batteries use rare and expensive metal catalysts for their air electrodes, such as platinum (Pt). This has hindered its further commercialization into the marketplace. As an alternative, perovskite catalysts that exhibit excellent catalyic performance has been proposed, yet there exists low activation barriers.
Professor Kim has solved this issue with a new composite catalyst combining two types of catalysts, each of which showed excellent performance in charge and discharge reactions. The metal catalyst (cobalt oxide), which performs well in charging, is deposited on a very thin layer on top of the manganese-based perovskite catalyst (LSM), which performs well in discharge. As a result, the synergistic effect of the two catalysts became optimal when the deposition process was repeated 20 times.
"During the repeated deposition and oxidation cycles of atomic layer deposition process, the Mn cations diffuse into Co3O4 from LSM, and therefore, the LSM-20-Co catalyst is composed of LSM encapsulated with the self-reconstructedspinel interlayer (Co3O4/MnCo32O4/LSM)," says Arim Seong (Combined M.S/Ph.D. of Energy and Chemical Engineering, UNIST), the first author of the study. "And this has enhanced the catalytic activitiy of the hybrid catalyst, LSM-20-Co, leading to superior bifunctional electrochemical performances for the ORR and the OER in alkaline solutions."
"To the best of our knowledge, this is the first study to investigate the self-reconstructed interlayer induced by the in-situ cation diffusion during ALD process for designing an efficient and stable bifunctional catalyst for alkaline zinc-air batteries," according to the research team.
"Our findings provide the rational design strategy of self-reconstructed interlayer for efficient electro-catalyst," says Professor Kim. "Therefore, this work can provide insight into the rational design strategy of metal oxide with perovskite materials."
Source and top image: UNIST