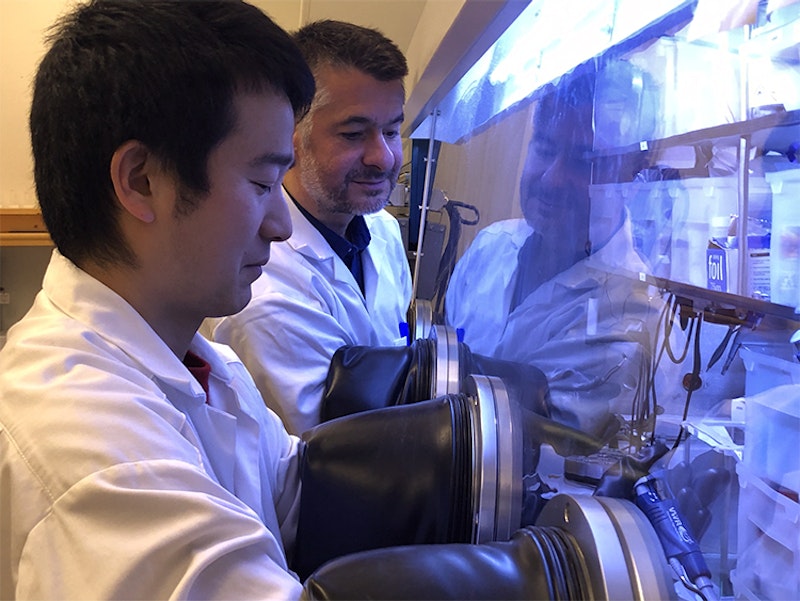 Solid state batteries are of great interest to the electric vehicle industry. Scientists at Chalmers and Xi'an Jiaotong University, China now present a new way of taking this promising concept closer to large-scale application. An interlayer, made of a spreadable, 'butter-like' material helps improve the current density tenfold, while also increasing performance and safety.​​​​​​​​ For more information see the IDTechEx report on Lithium-Ion Batteries for Electric Vehicles 2020-2030.
"This interlayer makes the battery cell significantly more stable, and therefore able to withstand much higher current density. What is also important is that it is very easy to apply the soft mass onto the lithium metal anode in the battery - like spreading butter on a sandwich," says researcher Shizhao Xiong at the Department of Physics at Chalmers.
Alongside Chalmers Professor Aleksandar Matic and Professor Song's research group in Xi'an, Shizhao Xiong has been working for a long time on crafting a suitable interlayer to stabilise the interface for solid state battery. The new results were recently presented in the prestigious scientific journal Advanced Functional Materials.
Solid state batteries could revolutionise electric transport. Unlike today's lithium-ion batteries, solid-state batteries have a solid electrolyte and therefore contain no environmentally harmful or flammable liquids.

Simply put, a solid-state battery can be likened to a dry sandwich. A layer of the metal lithium acts as a slice of bread, and a ceramic substance is laid on top like a filling. This hard substance is the solid electrolyte of the battery, which transports lithium ions between the electrodes of the battery. But the 'sandwich' is so dry, it is difficult to keep it together - and there are also problems caused by the compatibility between the 'bread' and the 'topping'. Many researchers around the world are working to develop suitable resolutions to address this problem.
The material which the researchers in Gothenburg and Xi'an are now working with is a soft, spreadable, 'butter-like' substance, made of nanoparticles of the ceramic electrolyte, LAGP, mixed with an ionic liquid. The liquid encapsulates the LAGP particles and makes the interlayer soft and protective. The material, which has a similar texture to butter from the fridge, fills several functions and can be spread easily.
Although the potential of solid-state batteries is very well known, there is as yet no established way of making them sufficiently stable, especially at high current densities, when a lot of energy is extracted from a battery cell very quickly, that is at fast charge or discharge. The Chalmers researchers see great potential in the development of this new interlayer.
"This is an important step on the road to being able to manufacture large-scale, cost-effective, safe and environmentally friendly batteries that deliver high capacity and can be charged and discharged at a high rate," says Aleksandar Matic, Professor at the Department of Physics at Chalmers, who predicts that solid state batteries will be on the market within five years.
Source and top image: Chalmers University of Technology