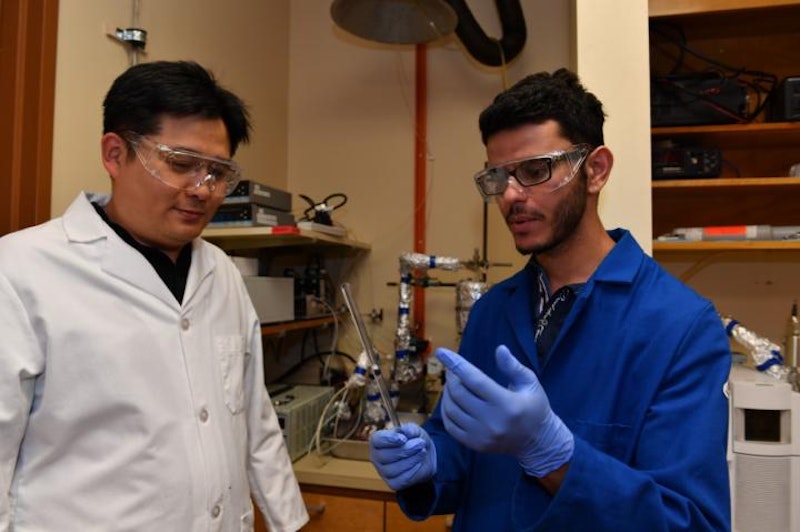 Washington State University researchers have made a key advance in solid oxide fuel cells (SOFCs) that could make the highly energy-efficient and low-polluting technology a more viable alternative to gasoline combustion engines for powering cars.
Led by PhD graduate Qusay Bkour and Professor Su Ha in the Gene and Linda Voiland School of Chemical Engineering and Bioengineering, the researchers have developed a unique and inexpensive nanoparticle catalyst that allows the fuel cell to convert logistic liquid fuels such as gasoline to electricity without stalling out during the electrochemical process. The research, featured in the journal, Applied Catalysis B: Environmental, could result in highly efficient gasoline-powered cars that produce low carbon dioxide emissions that contribute to global warming. For further information see the IDTechEx report on Fuel Cell Vehicles 2019-2029.
"People are very concerned about energy, the environment, and global warming," said Bkour. "I'm very excited because we can have a solution to the energy problem that also reduces the emissions that cause global warming."
Fuel cells offer a clean and highly efficient way to convert the chemical energy in fuels directly into electrical energy. They are similar to batteries in that they have an anode, cathode and electrolyte. However, unlike batteries which only deliver electricity they have previously stored, fuel cells can deliver a continuous flow of electricity as long as they have fuel.
Because they run on electrochemical reactions instead of making a piston do mechanical work, fuel cells can be more efficient than the combustion engines in our cars. When hydrogen is used as fuel, their only waste product is water. Despite the great promise of hydrogen fuel cell technology, however, storing high-pressure hydrogen gas in fuel tanks creates significant economic and safety challenges. There is little hydrogen gas infrastructure in the U.S., and the technology's market penetration is very low.
"We don't have readily available fuel cells that can run on a logistic liquid fuel such as gasoline," Bkour said.
Unlike pure hydrogen fuel cells, the developed SOFC technology can run on a wide variety of liquid fuels, such as gasoline, diesel, or even bio-based diesel fuels, and doesn't require the use of expensive metals in their catalysts. Cars powered by gasoline SOFCs could use existing gas stations. Fuel cells that run on gasoline, however, tend to build up carbon within the cell, stopping the conversion reaction. Other chemicals that are common in liquid fuels, such as sulfur, also stop the reactions and deactivate the fuel cell.
"The carbon-induced catalyst deactivation is one of the main problems associated with the catalytic reforming of liquid hydrocarbons," Bkour said.
For their SOFC fuel cell, the WSU team used an inexpensive catalyst made from nickel and then added nanoparticles of the element, molybdenum. Testing their molybdenum-doped catalyst, their fuel cell was able to run for 24 hours straight without failing. The system was resistant to carbon build-up and sulfur poisoning. In contrast, a plain nickel-based catalyst failed in an hour.
Liquid fuel cell technology has tremendous opportunities for various power-hungry markets, including transportation applications. The researchers are now making bridges with the automotive industry to build fuel cells that can run under real-world and longer-lasting conditions.
Source and top image: Washington State University