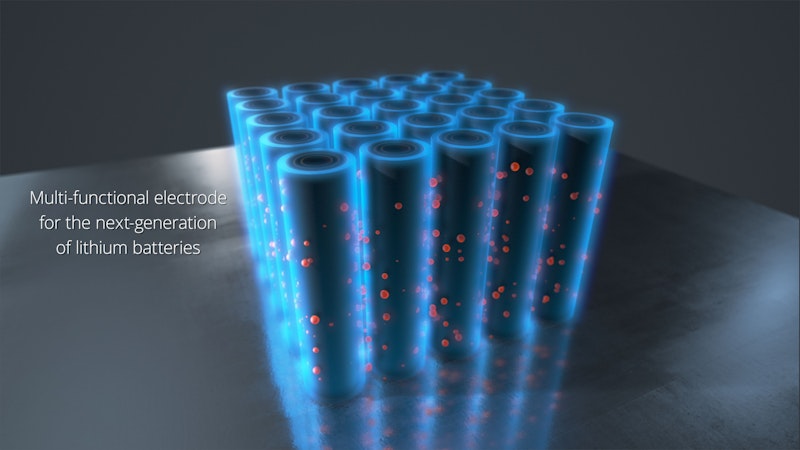 NAWA Technologies presents the Ultra Fast Carbon Electrode, a breakthrough nano-based innovation that unlocks next-level performance for all types of batteries, particularly those used by electric vehicles.
Currently one of the major limitations of battery power, energy and lifecycle is the design and material used for the electrode. Based on inefficient powders, existing electrodes have low electrical, thermal and ionic conductivity, along with poor mechanical behaviour when discharged and recharged, and can also suffer from early delamination and degradation leading to safety and lifecycle issues. for further information see the IDTechEx report on Lithium-Ion Batteries for Electric Vehicles 2020-2030.
But based on NAWA's patented vertically-aligned carbon nanotube (VACNT) design, which is also the basis of its next-generation ultracapacitors, the revolutionary Ultra Fast Carbon Electrode combines the highest ionic conductivity - thanks to a 3D fully accessible nanostructure - with the highest electrical and thermal conductivity, provided by its arrangement of 100 billion nanotubes per sq cm, all vertically aligned.
Nano-design for quantum leap in performance
This new 3D electrode geometry can solve the vast majority of performance constraints faced by global battery makers, boosting battery power by a factor 10, energy storage by up to three, lifecycle by up to five and reduce charging time down to minutes instead of hours. What's more, with the electrodes accounting for almost 25 per cent of the total battery cost, NAWA believes that its new design can offer significant cost savings.
Applicable to all chemistries
NAWA's Ultra Fast Carbon Electrode is a universal system, available as a primer for existing electrodes - where the VACNT increases electrical conduction - and ready for market in as little as 12 months. It is also available as a full 3D-electrode (anode or cathode) where the VACNT themselves serve as a framework on which lithium insertion material can be coated. This is the most advanced and efficient use of the innovation. NAWA is developing different concepts of coatings with various chemistries and partners - it expects the technology to be introduced and in production as early as 2023.
Both electrode products benefit from the six years NAWA has spent developing its VACNT growth process for its next-generation ultracapacitors, having now reached the capacity to grow VACNT on both sides of a one metre width aluminium substrate in a roll-to-roll manner, with no solvents or binders, reducing the electrode cost on a $/Wh basis by 30 per cent.
Eco-friendly
NAWA's dry electrode technology also brings significant environmental advantages, being easily recyclable and eco-disposable at the end of its long lifecycle. As a result, NAWA estimates that by using an Ultra Fast Carbon Electrode in lithium battery cell, the CO2 footprint could be reduced by as much as 60 per cent, simply because less active material is required.
Huge benefits for electric vehicles
All types of batteries can benefit from the Ultra Fast Carbon Electrode, but with the automotive industry now consuming 75 percent of lithium battery production and electric vehicles requiring ever-improved range, charging times and lifecycles, NAWA Technologies sees this sector as a major target. Applied to an electric vehicle, an advanced lithium-ion battery with an Ultra Fast Carbon Electrode could double the kWh stored, meaning EVs could draw on more power to go further, or faster, making 1,000km ranges commonplace in a mass market EV. Charging time could be reduced to as little as five minutes for an 80 per cent charge, while battery lifecycle could be improved by a factor of up to five.
In addition, NAWA Technologies is also developing a concept called NAWAShell, an integrated structural hybrid battery that incorporates VACNT to give two complimentary characteristics: enhanced mechanical strength and electrical energy storage within the core of the composite structure.
Pascal Boulanger, Founder, Chairman of the board, CTO and COO said: "Since the beginning of the battery industry, most performance increases have come from materials but it has reached a plateau today. Combine abundant carbon with nanoscale electrode architecture advances and you have a game-changer. NAWA's Ultra Fast Carbon Electrode brings a step change in electrode design and performance thanks to our vertically aligned carbon nanotube technology. Offering huge increases in power, energy storage and lifecycle, as well as being clean and cost-effective, the potential is enormous."
Ulrik Grape, CEO of NAWA Technologies said: "NAWA's Ultra Fast Carbon Electrode will allow us to charge batteries faster, go further and for longer - and all with a product based on one of the world's most abundant and green materials: carbon. Our technology can help to dramatically reduce the environmental impact of battery systems, so much so that we believe this electrode innovation could halve the time in which an electric vehicle pays back the CO2 created in its manufacture - as well as being able to recharge in the same time it takes to refuel, and drive the same distance on electricity as a tank of gas."
About NAWA Technologies
Based in Aix-en-Provence, France, NAWA Technologies is a world-leader in innovative energy storage. Its Ultra-Fast Carbon Batteries are the next generation of the ultracapacitor, featuring vertically aligned carbon nanotube electrodes - the fastest electrodes in the world.
Combined with a pioneering unique coating they can offer up to five times more energy than existing ultracapacitors and ten times more power, depending on application. Setting new standards for charging speed, frequency and environmental friendliness, NAWA Technologies' Ultra-Fast Carbon Battery bridges the gap between existing ultracapacitors and more traditional lithium-ion batteries.
Capable of being charged and discharged within seconds over a million cycles without any loss in performance, the batteries are also environmentally friendly to produce and have exceptional second life usage, because they are based on carbon - a naturally-occurring, accessible and abundant material. NAWA Technologies' new Ultra-Fast Carbon Batteries have multiple uses, from the power tool and manufacturing sectors, to automotive and commercial vehicle markets, within the IoT and sensor sectors as well as playing a key role in managing energy flow in a smart grid, to aerospace and even space.
Source: Influence Associates