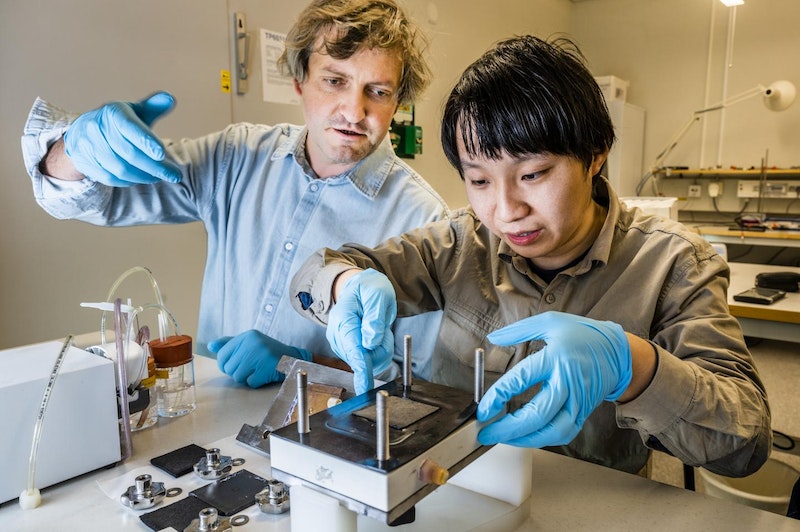 Researchers at the Laboratory of Organic Electronics, Linköping University, have for the first time demonstrated an organic battery. It is of a type known as a "redox flow battery", with a large capacity that can be used to store energy from wind turbines and solar cells, and as a power bank for cars.
Redox flow batteries are stationary batteries in which the energy is located in the electrolyte, outside of the cell itself, as in a fuel cell. They are often marketed with the prefix "eco", since they open the possibility of storing excess energy from, for example, the sun and wind. Further, it appears to be possible to recharge them an unlimited number of times. However, redox flow batteries often contain vanadium, a scarce and expensive metal. The electrolyte in which energy is stored in a redox flow battery can be water-based, which makes the battery safe to use, but results in a lower energy density. for further information see the IDTechEx report on Redox Flow Batteries 2020-2030: Forecasts, Challenges, Opportunities.
Mikhail Vagin, principal research engineer, and his colleagues at the Laboratory of Organic Electronics, Campus Norrköping, have now succeeded in producing not only a water-based electrolyte but also electrodes of organic material, which increases the energy density considerably. It is possible in this way to manufacture completely organic redox flow batteries for the storage of, for example, energy from the sun and wind, and to compensate for load variation in the electrical supply grid.
They have used the conducting polymer PEDOT for the electrodes, which they have doped to transport either positive ions (cations) or negative ions (anions). The water-based electrolyte they have developed consists of a solution of quinone molecules, which can be extracted from forest-based materials.
"Quinones can be derived from wood, but here we have used the same molecule, together with different variants of the conducting polymer PEDOT. It turns out that they are highly compatible with each other, which is like a gift from the natural world," says Viktor Gueskine, principal research engineer in the Laboratory of Organic Electronics, and one of the authors of the article now published in Advanced Functional Materials.
The high compatibility means that the PEDOT electrodes help the quinone molecules switch between their oxidised and their reduced states, and in this way create a flow of protons and electrons.
"It is normally difficult to control the ion process, but we have managed it here. We also use a fundamental phenomenon within electrocatalysis in which one special ion in solution, in this case quinone ions, is converted to electricity. The phenomenon is conceptualised by us as ion-selective electrocatalysis, and probably exists in other types of membrane storage devices such as batteries, fuel cells and supercapacitors. This effect has never previously been discussed. We showed it for the first time in redox flow batteries," says Mikhail Vagin.
The organic redox flow batteries still have a lower energy density than batteries that contain vanadium, but they are extremely cheap, completely recyclable, safe, and perfect for storing energy and compensating for load variations in the electrical supply grid. Maybe in the future we will have an organic redox flow battery at home, as a power bank for the electric car.
Source and top image: Linköping University