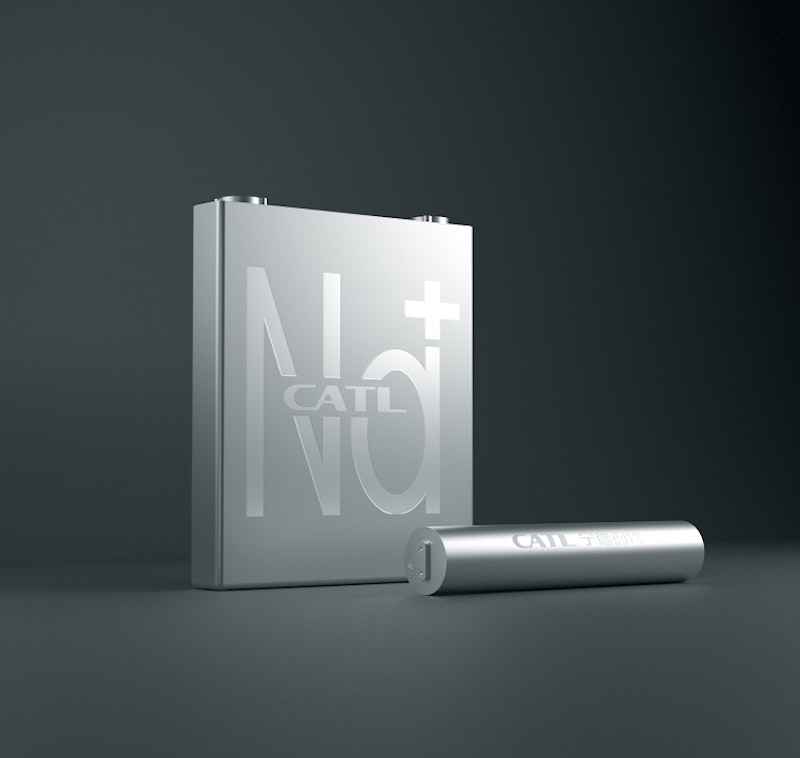 Contemporary Amperex Technology Co Ltd (CATL) has unveiled the company's first-generation sodium-ion battery, together with its AB battery pack solution - which is able to integrate sodium-ion cells and lithium-ion cells into one pack. Sodium-ion batteries will provide a new solution for the use of clean energy and transportation electrification, thus promoting the early realization of the goal of carbon neutrality.

Breaking through the bottleneck of sodium-ion battery technology

The sodium-ion battery has a similar working principle to the lithium-ion battery. Sodium ions also shuttle between the cathode and anode. However, compared with lithium ions, sodium ions have a larger volume and higher requirements regarding structural stability and the kinetic properties of materials. This has become a bottleneck for the industrialization of sodium-ion batteries. For further information see the IDTechEx report on Materials for Electric Vehicle Battery Cells and Packs 2021-2031.
CATL has been dedicated to the research and development of sodium-ion battery electrode materials for many years. In terms of cathode materials, CATL has applied Prussian white material with a higher specific capacity and redesigned the bulk structure of the material by rearranging the electrons, which solved the worldwide problem of rapid capacity fading upon material cycling. In terms of anode materials, CATL has developed a hard carbon material that features a unique porous structure, which enables the abundant storage and fast movement of sodium ions, and also an outstanding cycle performance.
Based on a series of innovations in the chemistry system, CATL's first generation of sodium-ion batteries has the advantages of high-energy density, fast-charging capability, excellent thermal stability, great low-temperature performance and high-integration efficiency, among others. The energy density of CATL's sodium-ion battery cell can achieve up to 160Wh/kg, and the battery can charge in 15 minutes to 80% SOC at room temperature. Moreover, in a low-temperature environment of -20°C, the sodium-ion battery has a capacity retention rate of more than 90%, and its system integration efficiency can reach more than 80%. The sodium-ion batteries' thermal stability exceeds the national safety requirements for traction batteries. The first generation of sodium-ion batteries can be used in various transportation electrification scenarios, especially in regions with extremely low temperatures, where its outstanding advantages become obvious. Also, it can be flexibly adapted to the application needs of all scenarios in the energy storage field.
CATL has always been committed to contributing to the green energy resolution and making unremitting efforts in three strategic development directions. The first development direction is to replace stationary fossil energy with renewable energy generation and energy storage; the second is to replace mobile fossil energy by using EV batteries to accelerate the development of E-mobility; the third is to promote the integration innovation of market applications leveraging electrification plus intelligence to accelerate the drive towards new energy applications in different fields. According to CATL, the next generation of sodium-ion batteries' energy density development target is to exceed 200Wh/kg.
In terms of battery system innovation, CATL has made another breakthrough in battery system integration and developed an AB battery system solution, which is to mix and match sodium-ion batteries and lithium-ion batteries in a certain proportion and integrate them into one battery system, and control the different battery systems through the BMS precision algorithm. The AB battery system solution can compensate for the current energy-density shortage of the sodium-ion battery, and also expand its advantages of high power and performance in low temperatures. Thanks to this innovative structure system, application scenarios for the lithium-sodium battery system are expanded.
Source and top image: CATL