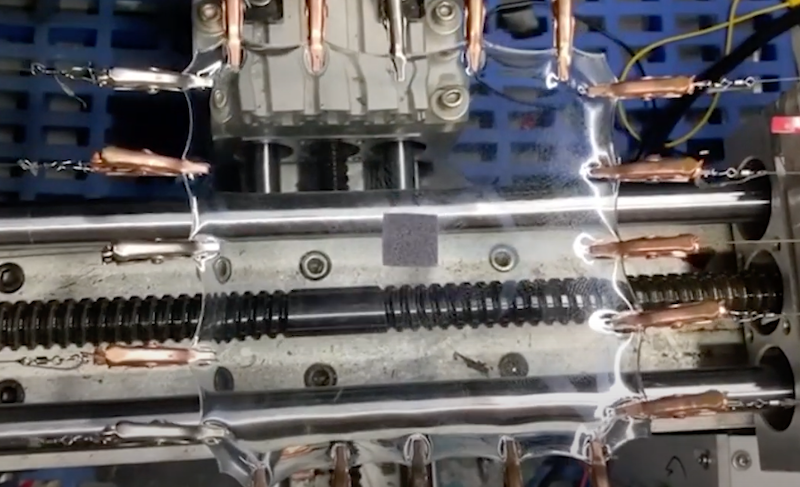 Some electronics can bend, twist and stretch in wearable displays, biomedical applications and soft robots. While these devices' circuits have become increasingly pliable, the batteries and supercapacitors that power them are still rigid. Now, researchers in ACS' Nano Letters report a flexible supercapacitor with electrodes made of wrinkled titanium carbide — a type of MXene nanomaterial — that maintained its ability to store and release electronic charges after repetitive stretching.
One major challenge stretchable electronics must overcome is the stiff and inflexible nature of their energy storage components, batteries and supercapacitors. Supercapacitors that use electrodes made from transitional metal carbides, carbonitrides or nitrides, called MXenes, have desirable electrical properties for portable flexible devices, such as rapid charging and discharging. And the way that 2D MXenes can form multi-layered nanosheets provides a large surface area for energy storage when they're used in electrodes. However, previous researchers have had to incorporate polymers and other nanomaterials to keep these types of electrodes from breaking when bent, which decreases their electrical storage capacity. So, Desheng Kong and colleagues wanted to see if deforming a pristine titanium carbide MXene film into accordion-like ridges would maintain the electrode's electrical properties while adding flexibility and stretchability to a supercapacitor. For further information see the IDTechEx report on Flexible, Printed and Thin Film Batteries 2020-2030: Technologies, Markets and Players.
The researchers disintegrated titanium aluminum carbide powder into flakes with hydrofluoric acid and captured the layers of pure titanium carbide nanosheets as a roughly textured film on a filter. Then they placed the film on a piece of pre-stretched acrylic elastomer that was 800% its relaxed size. When the researchers released the polymer, it shrank to its original state, and the adhered nanosheets crumpled into accordion-like wrinkles.
In initial experiments, the team found the best electrode was made from a 3 µm-thick film that could be repetitively stretched and relaxed without being damaged and without modifying its ability to store an electrical charge. The team used this material to fabricate a supercapacitor by sandwiching a polyvinyl(alcohol)-sulfuric acid gel electrolyte between a pair of the stretchable titanium carbide electrodes. The device had a high energy capacity comparable to MXene-based supercapacitors developed by other researchers, but it also had extreme stretchability up to 800% without the nanosheets cracking. It maintained approximately 90% of its energy storage capacity after being stretched 1,000 times, or after being bent or twisted. The researchers say their supercapacitor's excellent energy storage and electrical stability is attractive for stretchable energy storage devices and wearable electronic systems.
Source and top image: American Chemical Society