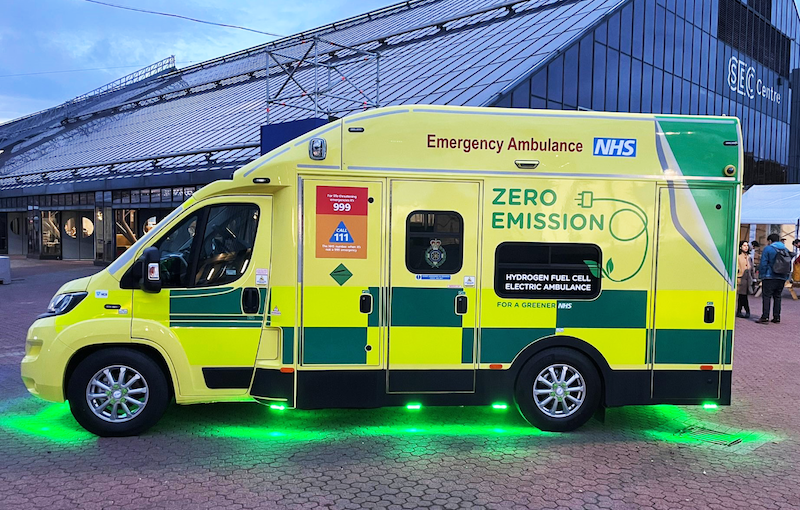 Visitors to COP26 in Glasgow are viewing the world's first hydrogen fuelled ambulance, created by ULEMCo, the UK hydrogen fuel pioneer, and their partners. Interest is strong in the working prototype vehicle, which incorporates a hydrogen fuel cell in the powertrain, can be refuelled quickly and is capable of up to a 300-mile range.
Named for Zero Emission Rapid Response Operations ambulance, the ZERRO project was originally started by Yorkshire Ambulance Service, where their range requirements require the flexibility that hydrogen can provide. It will in the meantime be trialled by the London Ambulance Service, where they can gain access to the public refuelling stations around London. The project led by ULEMCo, with expert partners including Mellor, Promech Technologies, Lyra Electronics and VCS, and supported by Innovate UK and NHS England & NHS Improvement, is aiming to show best in class zero-emission operation for urban and rural use.
Innovations built into the ambulance include a hydrogen fuel cell range extender with an electric drive, a low frame chassis and a bespoke lightweight ambulance body. Specific features such as the low access floor and a frame-based body enable it to meet the payload requirements of the service, and the hydrogen fuel cell ensures productivity of the asset with fast and flexible refuelling. For further information see the IDTechEx report on The Hydrogen Economy, Fuel Cells and Hydrogen Production Methods.
In Glasgow, the prototype ambulance is being shown along with the hydrogen fuel cell modules (see pics). on an NHS exhibition stand. International leaders and climate experts have the chance to see the ambulance close up.
Following COP26, the Ambulance, which can both recharge and refill, will be trialled in London, to test its operational flexibility and fit for purpose. NHS England and NHS Improvement plan to work with ambulance trusts to trial the ambulance across England, and develop an operational plan to roll out zero emission ambulances. "With further investment and infrastructure, it is hoped that zero emissions ambulances could be deployed throughout the NHS," said a Greener NHS spokesperson.
For the partners, Amanda Lyne, MD of ULEMCo said: "A great deal of hard work from the industrial partners has gone into bringing the ZERRO project to this stage. We believe this is a key milestone in the development of hydrogen mobility, and shows what can be achieved today to achieve zero emissions from HGV and utility vehicles."
About ULEMCo
ULEMCo Ltd is the world's first hydrogen commercial vehicle conversion company, enabling fleet and commercial vehicle owners to access to zero emission hydrogen fuel, as part of their strategies to reduce transport related carbon emissions. ULEMCo is based in Liverpool, UK and was founded in 2014 to commercialise its globally unique UK capability in hydrogen technology to convert commercial vehicles (from LGV to HGV and specialist utility vehicles like refuse trucks, gritter and sweepers) to run on hydrogen. This is achieved using either the company's technology for hydrogen dual fuel, or applying know-how and experience to developing zero emission engine vehicles and hydrogen fuel cell integration. There are nearly half a million heavy duty trucks on the road in the UK alone; all of them need to be decarbonised by 2050! Battery electric technology is just not practical for most of these vehicles, whereas hydrogen with its fast refuelling and higher energy density is by far a better option. Using hydrogen instead of conventional fuels enables commercial fleets to benefit from a reduced carbon footprint, while still having the full range capability of standard diesel vehicles. Alongside various partners, ULEMCo already supports a fleet of vehicles across a range of hydrogen hubs in the UK, and is rapidly extending its capability to provide 'fleetwide conversion to hydrogen' across the globe.
www.ulemco.com