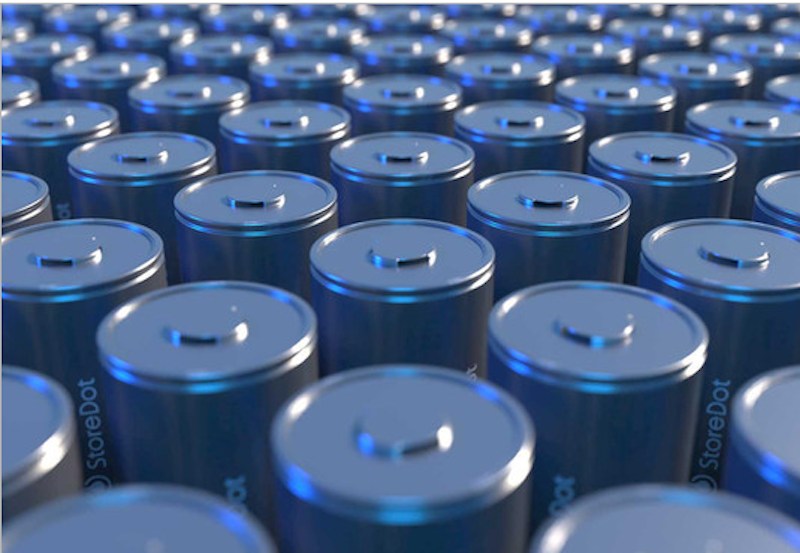 StoreDot, the pioneer of extreme fast charging (XFC) battery technology for electric vehicles, has become the first company to manufacture silicon-dominant anode XFC cell technologies, ready for electric vehicles, on a production line.
In a crucial step towards production at scale of technologies that will decrease electric vehicle charging times by half, A-Series Samples of XFC pouch cells have been produced by StoreDot's manufacturing partner EVE Energy. These cells will go on to be shipped to global car manufacturers, already partnering with StoreDot, to begin real-world testing.
Dr Doron Myersdorf, StoreDot CEO "StoreDot's mission is to provide global automotive manufacturers extreme fast charging technologies that will enable them to help consumers overcome what is known to be the major barrier to mass EV adoption. We offer a 50% reduction in charging time for the same cost, but mass production on new technologies is a critical step, which is why these first A-Series Samples are such a major milestone in our technology roadmap. These XFC sample cells will shortly be shipped to our global car-making partners for real-world testing and we are confident they will play a major role in increasing the crucial "miles per minute" rate which is key to driver's experience and eliminating range anxiety. Our rapid development process is a result of our technology being uniquely designed for manufacturing (DFM) to be produced on existing Li-ion production lines, assisted by our proprietary Artificial Intelligence, which enables development from concept to production to be fast-tracked. Meaning that we are now on track to manufacture these XFC cells, in pouch or cylindrical form, at scale by 2024. They will then rapidly go into zero-emissions vehicles to assist the journey towards a cleaner world. We're also already working on our extreme energy density (XED) solid-state technology which will enter mass production in 2028."
This is the latest development for StoreDot's rapid advancement in extreme fast charging lithium-ion batteries for use in the automotive sector. It has recently revealed plans to make its breakthrough 'booster' technology, utilizing hardware and software advances and covered by patent, available to other organizations on an open-source basis. For further information see the IDTechEx report on Materials for Electric Vehicle Battery Cells and Packs 2021-2031.
About StoreDot
StoreDot is a pioneer and leader of extreme fast charging (XFC) batteries that overcome the critical barrier to mainstream EV adoption - range and charging anxiety. The company has revolutionized the conventional Li-ion battery by designing and synthesizing proprietary organic and inorganic compounds, making it possible to fully charge an EV in just five minutes - the same time it takes to refuel a conventional combustion engine vehicle. StoreDot's battery technology is optimized for best driver experience with XFC in Li-ion batteries, as well as future technologies for extreme energy-density (XED).StoreDot's strategic investors include BP, Daimler, Samsung Ventures and TDK. In 2019, the company achieved a world first by demonstrating the live full charge of a two-wheeled EV in just five minutes. In 2020, the company demonstrated the scalability of its XFC batteries for other industries, by fully charging a commercial drone in five minutes in another world first. Moving XFC battery technology from the lab to a commercially-viable product for the first time, StoreDot has launched engineering samples of its first-generation batteries that are designed to be manufactured at scale on traditional Li-ion production lines.
For more information see: www.store-dot.com