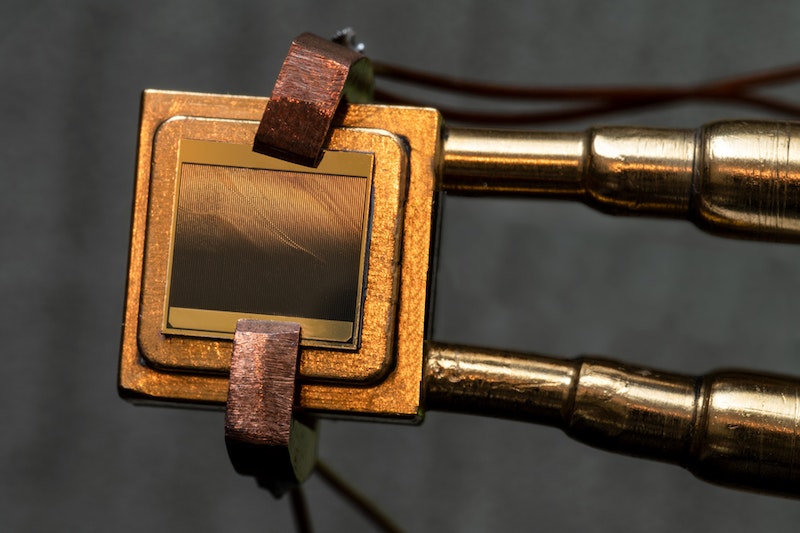 Engineers at MIT and the National Renewable Energy Laboratory (NREL) have designed a heat engine with no moving parts. Their new demonstrations show that it converts heat to electricity with over 40 percent efficiency — a performance better than that of traditional steam turbines.
The heat engine is a thermophotovoltaic (TPV) cell, similar to a solar panel's photovoltaic cells, that passively captures high-energy photons from a white-hot heat source and converts them into electricity. The team's design can generate electricity from a heat source of between 1,900 to 2,400 degrees Celsius, or up to about 4,300 degrees Fahrenheit. The researchers plan to incorporate the TPV cell into a grid-scale thermal battery. The system would absorb excess energy from renewable sources such as the sun and store that energy in heavily insulated banks of hot graphite. When the energy is needed, such as on overcast days, TPV cells would convert the heat into electricity, and dispatch the energy to a power grid. For further information see the IDTechEx report on Batteries for Stationary Energy Storage 2021-2031.
With the new TPV cell, the team has now successfully demonstrated the main parts of the system in separate, small-scale experiments. They are working to integrate the parts to demonstrate a fully operational system. From there, they hope to scale up the system to replace fossil-fuel-driven power plants and enable a fully decarbonized power grid, supplied entirely by renewable energy.
"Thermophotovoltaic cells were the last key step toward demonstrating that thermal batteries are a viable concept," says Asegun Henry, the Robert N. Noyce Career Development Professor in MIT's Department of Mechanical Engineering. "This is an absolutely critical step on the path to proliferate renewable energy and get to a fully decarbonized grid."
Henry and his collaborators have published their results today in the journal Nature. Co-authors at MIT include Alina LaPotin, Kyle Buznitsky, Colin Kelsall, Andrew Rohskopf, and Evelyn Wang, the Ford Professor of Engineering and head of the Department of Mechanical Engineering, along with Kevin Schulte and collaborators at NREL in Golden, Colorado.
More than 90 percent of the world's electricity comes from sources of heat such as coal, natural gas, nuclear energy, and concentrated solar energy. For a century, steam turbines have been the industrial standard for converting such heat sources into electricity. On average, steam turbines reliably convert about 35 percent of a heat source into electricity, with about 60 percent representing the highest efficiency of any heat engine to date. But the machinery depends on moving parts that are temperature- limited. Heat sources higher than 2,000 degrees Celsius, such as Henry's proposed thermal battery system, would be too hot for turbines.
In recent years, scientists have looked into solid-state alternatives — heat engines with no moving parts, that could potentially work efficiently at higher temperatures.
"One of the advantages of solid-state energy converters are that they can operate at higher temperatures with lower maintenance costs because they have no moving parts," Henry says. "They just sit there and reliably generate electricity."
Thermophotovoltaic cells offered one exploratory route toward solid-state heat engines. Much like solar cells, TPV cells could be made from semiconducting materials with a particular bandgap — the gap between a material's valence band and its conduction band. If a photon with a high enough energy is absorbed by the material, it can kick an electron across the bandgap, where the electron can then conduct, and thereby generate electricity — doing so without moving rotors or blades.
To date, most TPV cells have only reached efficiencies of around 20 percent, with the record at 32 percent, as they have been made of relatively low-bandgap materials that convert lower-temperature, low-energy photons, and therefore convert energy less efficiently. In their new TPV design, Henry and his colleagues looked to capture higher-energy photons from a higher-temperature heat source, thereby converting energy more efficiently. The team's new cell does so with higher-bandgap materials and multiple junctions, or material layers, compared with existing TPV designs.
The cell is fabricated from three main regions: a high-bandgap alloy, which sits over a slightly lower-bandgap alloy, underneath which is a mirror-like layer of gold. The first layer captures a heat source's highest-energy photons and converts them into electricity, while lower-energy photons that pass through the first layer are captured by the second and converted to add to the generated voltage. Any photons that pass through this second layer are then reflected by the mirror, back to the heat source, rather than being absorbed as wasted heat.
The team tested the cell's efficiency by placing it over a heat flux sensor — a device that directly measures the heat absorbed from the cell. They exposed the cell to a high-temperature lamp and concentrated the light onto the cell. They then varied the bulb's intensity, or temperature, and observed how the cell's power efficiency — the amount of power it produced, compared with the heat it absorbed — changed with temperature. Over a range of 1,900 to 2,400 degrees Celsius, the new TPV cell maintained an efficiency of around 40 percent.
"We can get a high efficiency over a broad range of temperatures relevant for thermal batteries," Henry says.
The cell in the experiments is about a square centimeter. For a grid-scale thermal battery system, Henry envisions the TPV cells would have to scale up to about 10,000 square feet (about a quarter of a football field), and would operate in climate-controlled warehouses to draw power from huge banks of stored solar energy. He points out that an infrastructure exists for making large-scale photovoltaic cells, which could also be adapted to manufacture TPVs.
"There's definitely a huge net positive here in terms of sustainability," Henry says. "The technology is safe, environmentally benign in its life cycle, and can have a tremendous impact on abating carbon dioxide emissions from electricity production."
This research was supported, in part, by the U.S. Department of Energy.
Source and top image: MIT

Great breakthrough! Should advance facilities for space commerce too.