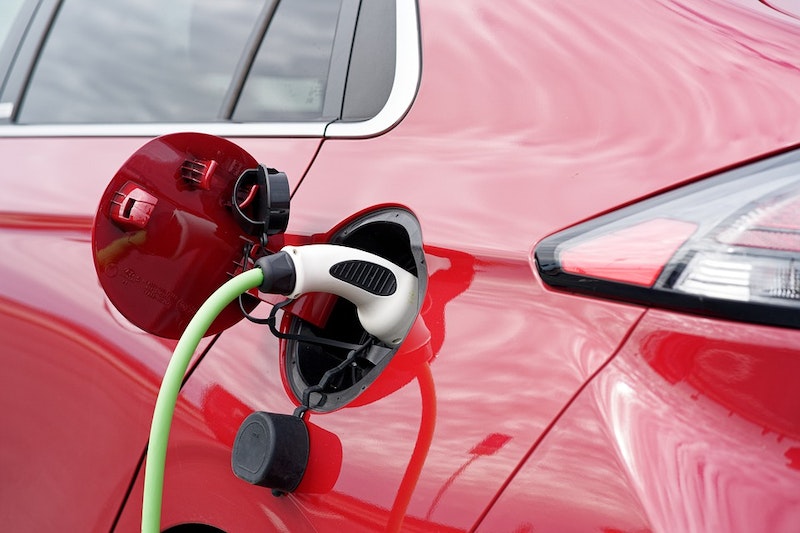 Over the last decade, advances in research and development have led to more efficient lithium-ion batteries. Yet, significant shortcomings remain. One challenge is the need for faster charging, which can help speed the adoption of electric vehicles. A research team led by Boise State University and the University of California San Diego has taken an unconventional approach to this problem. Using the resources of the U.S. Department of Energy's (DOE) Argonne National Laboratory, they created a high performance material for battery electrodes. The compound, niobium pentoxide, has a novel crystalline structure. It shows promise for speeding up charging while providing excellent storage capacity.
During charging, lithium ions move from the positive electrode (cathode) to the negative electrode (anode), commonly made of graphite. At higher charging speeds, lithium metal tends to accumulate on the graphite's surface. This effect, known as plating, tends to degrade performance and can cause batteries to short circuit, overheat and catch on fire. Niobium pentoxide is much less susceptible to plating, potentially making it safer and more durable than graphite. In addition, its atoms can arrange in many different stable configurations that don't require much energy to reconfigure. This presents opportunities for researchers to discover new structures that could enhance battery performance. for further information see the IDTechEx report on Materials for Electric Vehicle Battery Cells and Packs 2021-2031.
For this study, the researchers built a coin cell with niobium pentoxide as the electrode material. (A coin cell, also known as a button cell, is a small, circular-shaped battery device.) The niobium pentoxide had an amorphous structure — in other words, a disordered arrangement of atoms. When the cell was charged and discharged numerous times, the disordered structure transformed into an ordered, crystalline one. This particular structure had never been previously reported in the scientific literature. Compared to the disordered arrangement, the crystalline structure enabled easier, faster transport of lithium ions into the anode during charging. This finding points to the material's promise for fast charging, and other measurements suggest that it can store a large amount of charge.
Because of the complex changes during the charge-discharge cycle, several complementary diagnostic tools were needed for a comprehensive understanding. That's where Argonne — and a pair of DOE Office of Science user facilities at the laboratory — came in. Yuzi Liu, a scientist in Argonne's Center for Nanoscale Materials (CNM), used a technique called transmission electron microscopy to verify the structural transformation from amorphous to crystalline. This technique sends high-energy electron beams through a material sample. It creates digital images based on the interaction of the electrons with the sample. The images show how atoms are arranged.
"Since the electron beam is focused on a small area of the sample, the technique provides detailed information about that particular area," said Liu.
Hua Zhou, a physicist in Argonne's Advanced Photon Source (APS), confirmed the structural change with another technique known as synchrotron X-ray diffraction. This involves hitting the sample with high-energy X-ray beams, which are scattered by the electrons of the atoms in the material. A detector measures this scattering to characterize the material's structure. X-ray diffraction is effective for providing information about overall structural changes across an entire material sample. This can be helpful in studying battery electrode materials because their structures tend to vary from one area to another.
"By hitting the anode material with X-ray beams at different angles, I confirmed that it was uniformly crystalline along the surface and in the interior," said Zhou.
The research also drew upon other Argonne capabilities for characterizing materials. Justin Connell, a materials scientist in Argonne's Electrochemical Discovery Laboratory, used a tool called X-ray photoelectron spectroscopy to evaluate the anode material. Connell shot X-ray beams into the anode, ejecting electrons from it with a certain energy.
"The technique revealed that niobium atoms gain multiple electrons as the cell is charged," said Connell. ​"This suggests that the anode has a high storage capacity."
Argonne physicist Sungsik Lee also evaluated niobium's gain and loss of electrons. He used another technique called X-ray absorption spectroscopy. This involved hitting the anode material with intense synchrotron X-ray beams and measuring the transmission and absorption of the X-rays in the material. "The technique provided an overall picture of the state of the electrons across the entire anode," said Lee. ​"This confirmed that niobium gains multiple electrons."
It is very difficult to make the high performance, crystalline niobium pentoxide with traditional synthesis methods, such as those that subject materials to heat and pressure. The unconventional synthesis approach used successfully in this study — charging and discharging a battery cell — could be applied to make other innovative battery materials. It could potentially even support fabrication of novel materials in other fields, such as semiconductors and catalysts.
Source: Argonne National Laboratory
Top image: Pixabay