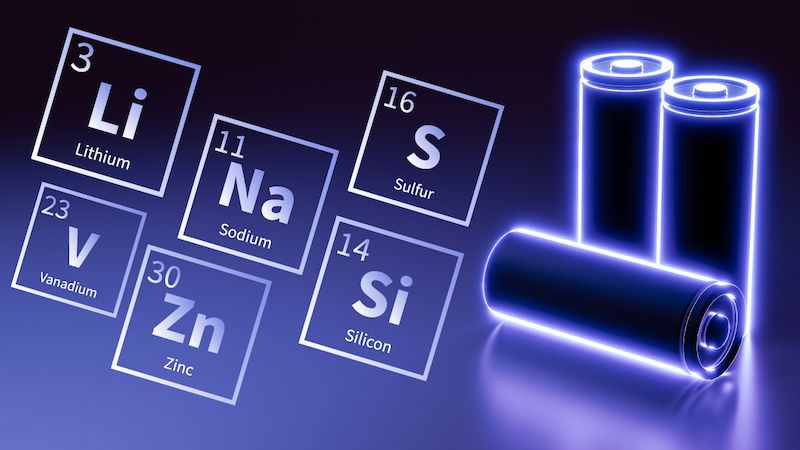 The current iteration of Li-ion batteries, which are based on graphite anodes, liquid electrolytes, and cathode materials such as NMC and LFP, are generally considered to be reaching their performance limits. However, from cell materials to battery designs, there are still several routes that can lead to further improvements in performance and cost.

A shift from graphite to silicon

Promising significant improvements in energy density and performance, silicon anodes offer an exciting alternative to the incumbent graphite anodes used. While silicon material has been used in the anode in small quantities of <5 wt%, moving beyond its use as an additive has proved difficult due to its inherent volume expansion and resulting stability and cycle life issues. However, silicon anode technology has steadily improved over the past 10-15 years, allowing cells to use anywhere from 5-100% silicon in the anode.
Highlighting the continued interest in the technology, developments in 2022 include Nexeon raising US$200M in funding and licensing material to SKC, Amprius' decision to go public, Group14 Technologies' US$400M funding round, and the acquisition of Tera Technos by POSCO Holdings. In addition, Amprius delivered 450 Wh/kg commercial cells for use in satellites, while the Whoop 4.0 fitness wearable released in September 2021 utilizes Sila Nano's silicon anode technology. Combined, these developments point to the maturing of the silicon anode market with the adoption of advanced silicon anode materials in a variety of applications becoming increasingly likely. As such, IDTechEx forecast considerable growth in the adoption of silicon anode materials, though graphite is still expected to remain the dominant anode through to the 2030s. 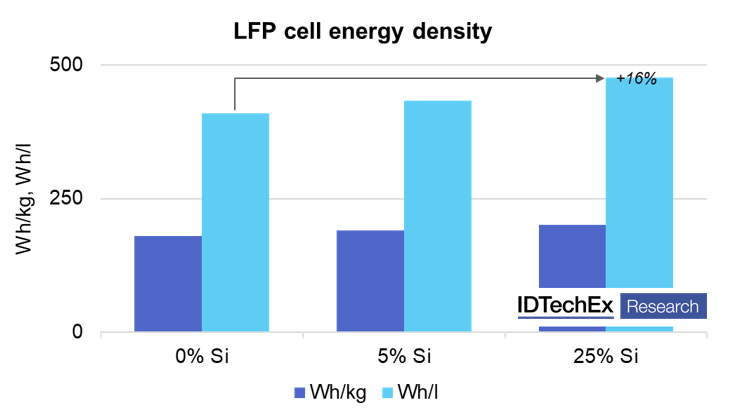 Future Li-ion batteries are likely to use a similar suite of cathode materials that are commercially available today. LNMO or the LFP related LMFP could be considered exceptions, though neither would provide improvements to energy density but offer different trade-offs between high performance and low cost. Li-Mn-rich NMC cathodes could provide a modest increase in energy density, but commercial development is limited and slow. Improvements to cathode materials are generally going to be incremental. Instead, the largest shift in cathode technology and innovation could stem from how they are synthesized. Current synthesis techniques require high temperatures over relatively long periods of time (days) whilst also using high volumes of reagent and water, leading to high manufacturing costs and environmental impact. Nano One Materials and 6K Energy (part of 6K Inc) are two companies aiming to commercialize new ways of synthesizing cathode materials.
Nano One Materials utilize a solution-based, 'one-pot' method to produce coated cathode materials. The company has a partnership with cathode manufacturer Pulead and entered into a development agreement with BASF earlier in 2022. 6K Energy utilizes a microwave plasma reactor to produce their cathode materials, though they are also able to synthesize silicon anode and solid electrolyte materials as well. 6K Inc closed US$102M in a series D funding round in May 2022 and has also entered development agreements with lithium producer Albemarle and fellow cathode start-up Our Next Energy. Both Nano One Materials and 6K Energy are promising streamlined production processes for improved throughputs, yields, and lower manufacturing costs as well as reduced environmental impacts.

For electric vehicles in particular, the design of the battery pack offers another key route to enhanced performance. Many automotive companies have announced batteries with cell-to-pack designs to eliminate materials associated with module housings and optimize packing efficiency, ultimately helping to improve energy density and improve battery integration into the vehicle. BYD advertise the possibility of improving volume utilization by 50%, from 40% to 60%, while battery manufacturer CATL announced that their latest cell-to-pack design could achieve a 72% volume utilization. Earlier in 2022, CATL announced their LFP packs could reach 160 Wh/kg and 290 Wh/l, which starts to be competitive with its NMC counterparts. Maximizing energy density can help to mitigate the primary disadvantage of cheaper LFP cells, offering a route to cheaper, long-range batteries. These types of battery designs do come with the downside of reduced serviceability, which may limit their use in commercial vehicles.

Improvements to battery management systems (BMS) can provide a route to improving multiple aspects of battery performance without the challenges associated with materials development. For example, Qnovo highlight how their BMS software and analytics can help simultaneously improve safety, cycle life, and charge time and increase the useable capacity of a battery. The company achieves this through a combination of battery use data and cell impedance measurements that inform physical models of Li-ion cells, which in turn are used to optimize operation and charging protocols. An additional use case for their BMS solution could stem from battery default detection, something which could be highly valuable in light of recent electric car recalls.
Away from EVs, improved BMS would be highly valuable to other end-uses, such as smartphones or power tools. The 1-100% charge in 19 minutes advertised by the OnePlus 10T is partly enabled by more intelligent charging algorithms, as well as more efficient thermal management. As well as this fast charge capability, One Plus also advertises a cycle life of 1600 cycles, beyond the typical cycle life advertised for LCO and consumer electronics batteries. While cell developments often include trade-offs between the key performance characteristics of energy density, cycle life, fast charging, and safety, improvements to the BMS could feasibly offer improvements to all of them.
Ultimately, there are numerous routes to improve battery performance and cost, including various others not discussed here. While some developments may only offer incremental benefits, their combination will allow Li-ion battery performance to continue its steady drive forward.
To find out more, please see the IDTechEx report, "Advanced Li-ion and Beyond Lithium Batteries 2022-2032: Technologies, Players, Trends, Markets". For the full energy storage portfolio from IDTechEx, please visit www.IDTechEx.com/Research/ES.
IDTechEx guides your strategic business decisions through its Research, Subscription and Consultancy products, helping you profit from emerging technologies. For more information, contact research@IDTechEx.com or visit www.IDTechEx.com.